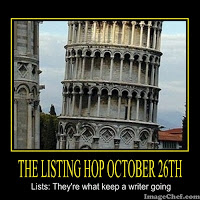 Today is the day for the ‘Listing Blog Hop’ hosted by Bish Denham and Alex J Cavanaugh; you can find them HERE and HERE respectively. I trust they will have the linky list up, so that you can visit the other participants and see just what type of lists they have posted.

A few weeks ago Mr. Stephen T. McCarthy of HERE ran a post inviting all to submit to him a list of their twenty-five 25 all-time favorite movies. He asked us to list the TOP TEN first and then the next fifteen. (He is taking these lists up until the end of the month, so you can still participate. Just send him your list or a notice of when and where you post it on your blog.) When I came across this ‘Listing Blog Hop’, I figured it was perfect timing to combine the two and give you a list of MY twenty-five 25 all-time favorite movies.

PLEASE KEEP IN MIND, this list is not my idea of the twenty-five greatest movies of all-time, but rather my guilty pleasures. In other words the movies I watch over and over again for various reasons. Some of them make me cry, some of them make me laugh, some I relate to for a whole bunch of personal reasons, and some are just good pure entertainment, in my opinion

You will notice that there are some actors that appear in many of my favorites and there are some movies that have a similar theme, i.e. I like Westerns and musicals. Oh well, let’s get to the list, shall we?

First the TOP TEN. I have listed them in order of my preference (all the way through to twenty-five).

Life is Beautiful – 1997, this movie stars Roberto Benigni, Nicoletta Braschi, and Horst Bucholz(as Dr. Lessing). A theme in many love stories is ‘would you die for someone’. Here in Life is Beautiful the theme is more like ‘how far would you go to live for someone’. A beautiful story that I first say in Italian with sub-titles and it moved me and made me cry. When I later saw it re-dubbed n English, absolutely nothing was lost.

Captain Ron – 1992, this movie stars Kurt Russell and Martin Short. It never ceases to make me laugh and having lived in the Caribbean, I can attest some of it is actually true. I can quote from this one all day long.
It’s A wonderful Life – 1946 starring Jimmy Stewart, Donna Reed, and Lionel Barrymore. If you haven’t seen this movie, shame on you. It’s a  favorite at Christmastime, but I generally manage to watch it two or three time a year, at least.

The Quiet Man – 1952 starring John Wayne, Maureen O’Hara and Barry Fitzgerald. This is another one everyone should see at least once. I absolutely love John Wayne and when he’s paired with Maureen O’Hara you can bet there will be sparks and magic a flying.

The Magnificent Seven – 1960 starring Yul Brenner Steve McQueen, Charles Bronson, Eli Wallach and Horst Buchholz. Yep, it’s a Western and one of exceptional quality. Imagine Horst Buchholz appearing in two of my top ten favorite movies. I bet you don’t even know who he is.

Meet Me In St Louis – 1944 starring Judy Garland, Margaret O’Brien and Mary Astor. This is an oldie but a goodie. It spans a year in the lives of this family in St Louis waiting and planning on attending the World’s Fair. Some really great songs came out of it.

Friendly Persuasion – 1956 starring Gary Cooper, Dorothy McGuire, and Anthony Perkins. A story about Quakers set in the time of the Civil War. Believe it or not there are some hilarious moments and some very serious ones.

Lady and the Tramp - 1955 I love Disney, at least the old Disney, but this one is my favorite. As a matter of fact I was so movied by this movie that I have had several Cocker spaniels as Pets. At one time I had two Cocker Spaniels and a cat names, Lily, Rosemary and the Jack of Hearts. 100 points to anyone who knows that reference.

Who Framed Roger Rabbit - 1988 starring Bob Hopkins, Christopher Lloyd and Joanna Cassidy. What a show this one is. Combining animation and real life actors in a seamless manner. Is there anything Christopher Lloyd hasn’t had his hand in that wasn’t all out funny.

Golden Earrings – 1947 starring Ray Milland and Marlene Dietrich. Ya it’s the gypsy in my soul that has me coming back to this one over and over again. Certainly a very different kind of love story.

OK, there’s my TOP TEN, now the next fifteen.

Casablanca – 1942 starring Humphrey Bogart, Ingrid Bergman, Claude Raines, and Sydney Greenstreet. Do I really have to tell you much about this classic. ‘At least we’ll always have Paris.’

Paint Your Wagon – 1969 starring Lee Marvin, Clint Eastwood and Jean Seberg. Yep, another musical and a Western to boot. This movie was a great big flop. Are you kidding me. Lee Marvin and Clint Eastwood in a musical; how innovative is that?

Chocolat – 2000 starring Johnny Depp, Juliette Binoche, and Judy Dench. This is a REAL guilty pleasure for me on many levels. Johnny Depp and Chocolate, need I say more?

Miracle on 34th Street – 1947 starring Edmund Gwenn, Maureen O’Haraq and Natalie Wood. OK, it’s a Christmas story and a favorite at that time of year, but truth be told, I’ve been known to sneak in a visit with Santa in April and July.

The Ten Commandments – 1956 starring Charlton Heston, and Yul Brenner. Another seasonal favorite that I watch year round. You can beat Chuck as Moses, no matter that The Bible tells us Moses had a speech impediment (probably a stutter) Heston commands the sea to part and is does.

Pride and Prejudice – 2005 starring Keira Knightly, Matthew Macfadyn and Donald Sutherland. Always a fan of this story, but not of the earlier movies. When this one was made I almost passed it up, but am glad I didn’t. The characterizations are perfect.

Bringing Up Baby – 1938 starring Cary Grant, and Katherine Hepburn. Not a big Katie fan, but in this one she is hilarious and so is Grant.

Charade – 1963 starring Cary Grant and Audrey Hepburn. I am a fan of this Hepburn and she is marvelous with the suave Mr. Grant.

North by Northwest – 1959 starring Cay Grant, Eva Marie Saint and James Mason. Yeah, I’m a Cary Grant fan. This Hitchcock thriller also stars ‘the heads’ (it’s what the locals in So. Dakota call Mt Rushmore). I almost moved to the butt side of ‘the heads’ once.

Tombstone – 1993 starring Kurt Russell, Val Kilmer, Sam Elliott and Bill Paxton. I was only introduced to this movie a few years ago, but it has become a favorite and I watch it often. A western that can’t be beat.

Parenthood – 1989 starring Steve Martin, Mary Steenburgen, Diane, Wiest and Rick Moranis. This movie is hilarious and serious at the same time. Many truth exist therein for all generations. When my kids were driving me crazy, I would pop this into the VCR or DVD and feel a whole lot better about myself as a parent.

Mermaids – 1990 starring Cher, Bob Hoskins, and Winona Ryder. Another movie about an unconventional family that is serious and hilarious at the same time. Very relevant, at least to me.

Donavan’s Reef – 1963 starring John Wayne and Lee Marvin. Wayne, Marvin and Hawaii, need I say more. I could watch this one every month, but then I’ve already told you I love John Wayne and lee Marvin, both real men.

Backdraft – 1991 starring Kurt Russell, William Baldwin and Robert De Niro. I come from a cop and fireman family. Those two professions seem to run in families, generation after generation. This movie also takes place in my hometown and it’s one where they got it right, complete with the correct accent. Did I also mention how much I like Kurt Russell?

The Holiday – 2006 starring Kate Winslet, Cameron Diaz, Jude Law and Jack Black. As you’ve probably noticed most of my favorites are older, some really old. This is the newest one on the list and I really enjoy it on a regular basis. Not exactly sure why, but I likes it.

Well, there you have it. A list of MY twenty-five all-time favorite movies, my guilty pleasures, if you will. I suppose this list tells you more about me than I normally like to reveal, but what the heck. It’s all in good fun.

Now go check out some of the other lists. I’ll bet there are a few others who also did a twenty-five favorite movies as a part of Mr. McCarthy’s survey somewhere in that ole linky list.

I would love to hear what you have to say about my favorites and if you agree or have even heard of any of these great movies.

I'll be back on November 1st with another BATTLE OF THE BANDS, until then Happy Trails!

Posted by farawayeyes at 2:00 AM