Battle of the Bands II 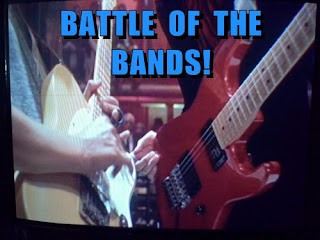 Holy Carp! It’s the Fifteenth of the month already, and time for another Battle of the Bands. I don’t know about all of you, but I had a good time reading your comments on the last Battle, and I know Mr. McCarthy did too.

So…for Battle of the Bands II everything remains the same. Listen to the two versions of the same tune, that I have posted here, and then ‘boot scoot’ your way on over to Ferret-Faced Fascist Friends the home of Stephen T. McCarthy and see what Mr. McCarthy has in store for you there.

Did I say everything remains the same, well, that’s not exactly true because Mr. McCarthy and I have decided to make a little change, just to make this more interesting, but I digress (I’m good at that). So don’t get too distracted. Listen to the two videos and the information about this little change will follow.

This week I’ve chosen an oldie but a goodie. This little ditty was written by Glen Frey and Don Henley (that’s right, two of The Eagles). It first appeared on The Eagles album of the same name in 1973. On its 2004 list of ‘The 500 Greatest songs of all Time’, Rolling Stone ranked it at 494. I think at one time or another, almost everyone liked to think of it as their personal theme song. A simple slow ballad that has been covered by a whole lot of folks, including but not limited to; Kenny Rogers, Clint Black, The Carpenters, Linda Ronstadt, Johnny Cash, Andy Williams and Neil Diamond. (Andy Williams, are you kidding me? Yep, it’s ANDY WILLIAMS all right. YIKES!)

For a minute I thought about pitting ‘the ladies’ against each other, but then I thought NAW! So, here’s Battle II. First up, the original sung by none other than Don Henley backed up by The Eagles.

Second, let’s see what you think of the female version. Number two sung by Karen Carpenter.

OK, you know the drill, vote in the comment section and tell me little bit about why you like this particular version. Then get 'yerself on over to Ferret-Faced Fascist Friends and vote for the selections there.

NOW, read on for the exciting changes we’ve (Mr. McCarthy and I) made to this little contest. Somebody besides these recording artists is gonna win big.

Here’s The Deal: By voting on the ‘Battle Of The Bands’ blog bits here and at the ‘FERRET-FACED FASCIST FREINDS’ blog, you can win the compact disc of your choice. Every 4 months, Stephen and I will add up how many times you voted on our blogs, and the person who has participated most often (i.e., submitted the most eligible votes) will get to select one compact disc that contains any one of the songs that were included in either of our ‘Battle Of The Bands’ installments (“Super-Colossal” expensive boxed-sets, imports, and ‘out-of-print’ compact discs not included). In the event of a tie, the names will be put in a Stetson and the name drawn from the cowboy hat will win the CD.

Rules For Voting: Stephen and I post new ‘Battle Of The Bands’ blog bits on the 1st and 15th of each month. We also post our own personal votes for the respective blog bits on the 7th and 21st of each month (i.e., six days later). For your vote to be counted, it must be submitted in our comment sections BEFORE we post our own votes (BEFORE we make our own votes known on the 7th and the 21st).

Every 4 months there will be a new compact disc winner. In other words, ‘Battle Of The Bands’ #1 was posted on August 1, 2013, so at the end of November, one of you lucky voters is going to win a CD that includes one of the songs we’ve featured in our ‘Battle Of The Bands’ installments (you get to choose, and it doesn’t matter if the song won or lost its battle – if you like it, it’s YOURS!)

Don't forget to come back on the 21st to see the results and read about our choices.

PLEASE, tell all of your friends to come by and let's make this a real contest.

Posted by farawayeyes at 6:03 AM