Here we are folks the day before Thanksgiving (well at least if you live in the States), which I don’t, but where I live it’s any excuse for a party and a day off from work. Since I am a US citizen and a thankful one at that, thought I should mention it publicly. BUT, first I want to tell you a little about the Cruzan experience (Cruzan – the term applied to the people of my island – St. Croix in the U.S. Territory of the U.S. Virgin Islands).

Ah, paradise most of your say…

Down here (any excuse for a holiday – remember) we celebrate Halloween and Diao de las Muerta  (Day of the Dead) which is a holiday more celebrated in Mexico and Central American. We went to a celebration on the far northwest end of the island where they featured ‘fire eating fire dancers'; Kiki and the Flaming Gypsies. Not something you see every day, and not something you see in the more civilized parts of the world. These gals with their flaming torches and hula hoops right up close and personal. I’m sure there were more than a few singed hairs floating around.

Next on my list is the local produce. Wow, there’s nothing like the tropics. Everything grows here, and grows like a weed, especially the weeds. There are places the ‘bush’ is so thick you cannot get through without a machete. Ah maybe that’s why everyone has one strapped to their back. Down here they call them ‘a cutlass’. Yeah, you read that right – hold over from the days of Cap’t Morgan – who knows?

Check out this local avocado. Also, here's a hermit crab who couldn't find a shell large enough so he substituted a glass jar. You kow what they say about folks who live in 'glass houses'. 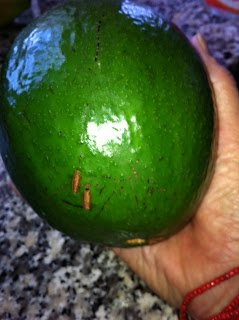 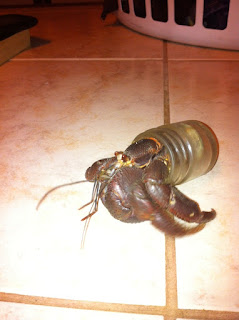 If you’re smart you will own and drive an ‘island car’. If you car is what we call an ‘island car’, you are less likely to be broken into and believe me that’s a problem. I have a friend who drives a fancy new car and it has been broken into as much as three times – on the same day – yeah, that's a bit of a problem. Best to take the important stuff out and leave the doors unlocked. Recently, I purchased a new car and my shopping around went from the 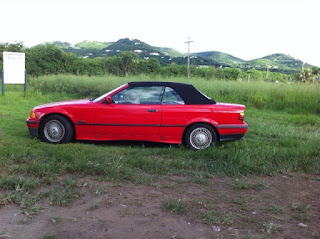 To the not so FURIOUS 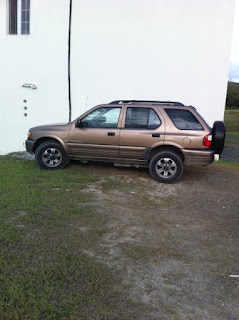 Both are actually island cars when you look closely. That little red BMW convertible was a ’94 and the interior was shot, but I didn’t care I wanted it badly. The Isuzu Rodeo is in better shape (an '01), the A/C works and so does the radio/CD player(none of those did in the Beamer). It’s safer and won’t disappear in one of the potholes, for which STX (the abbreviation for St. Croix) is famous. I did the right thing and bought the Isuzu, but only because it was $500 cheaper and that was all I had.

The beaches are phenomenal. 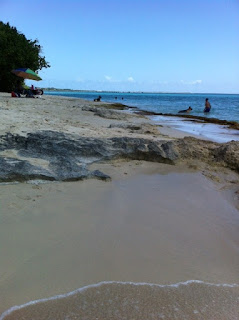 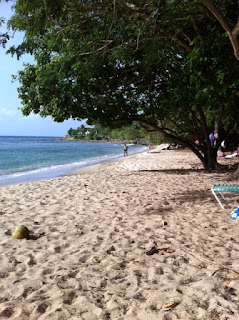 One of my final STX experiences happened just the other day. I was shopping in K-Mart our only larger department type store on island (well one of two – we have two K-Marts, but nothing else). While looking over some dry goods at the very front of the store, trying to pick out a tablecloth for my Thanksgiving table, I caught some movement out of the corner of my eye. I looked over and YIKES! there was a rat – yes I said RAT with a body about eight inches long and about another twelve inches of skinny pink tail.

OK, I’m not sure who is more shocked, me or the rat. I look around and there are people everywhere, including store personnel and nobody but me notices this furry little vermin. Well, the rat turns and runs back behind the Coke machine he came out from. I’m standing there in a state of shock wondering what to do when Mr. Rat comes back out and runs under a pallet holding some boxes about a foot away from me. Now, my first thought is to drop the tablecloth and exit the store as quickly as I can, but K-Mart is my only option and I’m an island girl, so I put the tablecloth in my cart and head down the aisle to look for some shampoo, I’m not planning on buying any food here today or ever again. Ha – it’s just another island experience. Sorry no pictures of this one.

I’ve been here on island for two and a half years now and I have to admit I’m starting to get a little homesick. I really missed fall this year and I wouldn’t mind a little snow for Christmas. Considering I’ve spent the previous 30+ years living in the Inter-mountain west at an altitude of one mile+, this stint at sea level has been fun, but it’s wearing thin. I’m ready to trade my flip flops back in for a pair of Sorrels.

All in all I’m grateful. I know if I leave the island, I will miss it and always look back on the experience (rat included) and be grateful for the time I’ve had to spend here in what some would call paradise. But mostly I’m NOT grateful for places or things BUT for people and experiences. It’s since and because I was coming here that I started blogging, writing, and living even louder than I had been before. Many of you reading today, I would not have met, but for this.

So, when you sit down to your turkey dinner tomorrow, think of me ‘Far Away’ sitting down to mine (actually I don’t eat meat or poultry, but I’ll still be sitting down in front of a turkey) and remember that Paradise is of our own making, it’s not really a place here on earth. Look around at those you love, remember those that are no longer with you, and think of the ones who appear as ‘words on a screen’ and be thankful for all. I am.
Posted by farawayeyes at 6:49 AM