BATTLE OF THE BANDS XXV - What a Wild and 'CRAZY' week it's been! 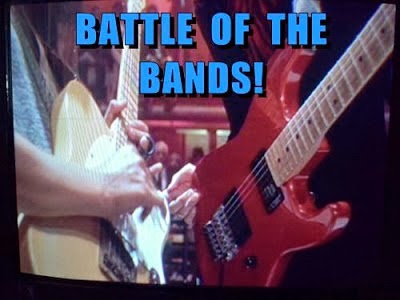 Whew! I almost didn’t make it here today. This past week has been like a one-two, knock out for me. The first blow came on Monday, when I felt like someone picked me up and threw me against a brick wall. It seems that when you have an Auto-Immune Disease, you can be fine one day and the next you’re flat on your back.  Needless to say I spent most of this week in bed, and not having a bit of fun (for those of you who have very vivid imaginations).

The second blow was actually the week before when this ‘dumb blonde’, got a notice that I needed to update and download a new media player. I could have sworn the notification was a ‘Windows’ notice, but apparently it was just cleverly disguised to look like one. Anyway…along with this ‘new and not so improved’ media player came a ton of malware and my entire computer was screwed up. It (the computer) had to make a trip down to Carson City to the computer doctor to have its guts cleaned out. Now it’s working and much faster, but there seems to be a problem with my router, so I’m hard-wired into the modem with no Wi-Fi. In all honesty I have no idea what all that last sentence means, other than I have to be plugged into my printer and I can’t get my Netflix Streaming. Hopefully, that will get cleared up soon (but, it won’t be by me).

I do want to Thank You all who sent me emails worrying over where I was, and if I was doing OK, even if I couldn’t reply. They really helped to cheer me up. I was able to keep up reading your blogs from my phone, but the ‘dumb phone’ I own won’t let me comment, or maybe that’s just me.

So, enough of the whining. There are some exciting things happening with this BATTLE OF THE BANDS. First off, Mr. Stephen T. McCarthy, the sexiest man on the planet (he didn’t like it when I called him the smartest man I know, last time, so we agreed that this was more appropriate), has a new blog. This blog is strictly devoted to BATTLE OF THE BANDS. It’s called STMcC Presents ‘Battle of the Bands’ and you can find it HERE

Once you’ve finished up here, head on over to this Exclusive New Site and see what STMcC has cooked up for you this month? I can also trust that he will publish the links to all the other participants, so you can visit every BOTB going on for August 1st.

The next exciting thing coming up is my theme. At the Results Post for BOTB XXVI I promised a theme for August and invited you to guess what it might be. I said that it was one word that might be used to describe me. Only two of you were brave enough to guess, and you were very kind also. The guess had something to do with BLONDE. Nope that’s not correct. Ya’ll know I’m not really a blonde, don’t ya. ‘Dumb Blonde’ is just one of those phrases that is kind of a catch-all for stupid human woman tricks. In actuality my hair color is much more volatile than blonde.

ANYWAY…My theme for August is: ‘CRAZY’ An extra special Thank You to all of you for not guessing correctly.

So let’s get on with it shall we.

First up Gnarls (you don’t suppose his mother really named him that, do you?) Barkley with 'Crazy'.

Next, Mr. Ray LaMontagne with the same song.

Now, you know what to do and how to do it. Leave me a comment with your vote and why. Then head on over to STMcC Presents ‘Battle of the Bands’ by clicking HERE and casting your vote there. THEN, visit all of the other participants. If you should feel that you want to post your own BATTLE, please let me know in the comment box and if possible leave a link, so everyone coming by here can find you also.

I’ll be back on the 7th – ‘if the creek don’t rise and the devil doesn’t come for me first’ (just kidding), with my vote and final tally.

Posted by farawayeyes at 6:02 AM