STILL CRAZY AFTER TWO WEEKS - BATTLE OF THE BANDS XXVI 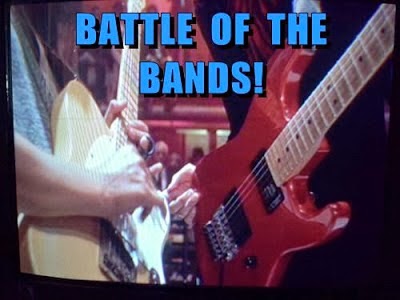 BATTLE OF THE BANDS XXV and I’m still ‘Crazy’. Let’s get right to it, shall we?

Continuing on with my theme of ‘Crazy’ let’s talk about a little tune that was number 2 on the Country Charts in 1962. Wait a minute let’s take it back a year to 1961, when the then journeyman singer-songwriter Willie Nelson (with the help of a friend named Oliver English) wrote the song ‘Crazy’ for country singer Billy Walker. Walker turned it down as being ‘too girly’.

Wacky-watchee describes the song as a ‘jazz-pop ballad with country overtones and a complex melody. The lyrics describe the singer’s state of bemusement at the singer’s own helpless love for the object of his/her affection.’  OK then.

‘Crazy’ went on to be the number 2 song the Country Charts in 1962 performed by none other than the darling of the Country Circuit Patsy Cline. Nelson later recorded several version of the song himself, including a trio version with Elvis Costello and Diana Krall.

Now I bet you’re figuring I’m gonna pit Mr. Nelson against Miss Cline, but not so. I want you to think/listen a little harder than that, BUT I will give you a snippet of each in the video which includes a brief interview between Willie and Charlie Dick (Patsy’s husband).

Now the BATTLE for today. Let’s put Miss LeAnn Rimes, who recorded this song in the style of Patsy Cline. At the time of the original recording LeAnn was only seventeen years old (too bad she grew up).

Next, in keeping with another theme going on in the current BOTB (over at Tossing It Out – Arlee Bird is running a ‘Girls against Boys’ BATTLE) – here is Neil Young covering the same song. Neil, like Willie, weren’t afraid of no ‘girly’ songs.

While this video might not be the best quality (it's that recording box thing) it's Neil's version I want you to hear.

OK, now you know what to do and how to do it. Leave me your vote in the comment box with your reason WHY. Then head on over to the brand spanking new blog space of the ‘sexiest man on the planet’ Mr. Stephen T. McCarthy and see what he has cooked up for ya his is BOTB. You can find Mr. McCarthy HERE. STMcC has a lot more computer cents than me, so he will give you a link to the other participants in BATTLE OF THE BANDS. It appears that this time out we have added another new participant bringing the total up to 9, count ‘em 9 participants. Whoever woulda thunk there would be that many people that ‘Crazy’.

I’ll be back on the 21st with my vote and the final tally. See ya then.

Posted by farawayeyes at 8:40 AM