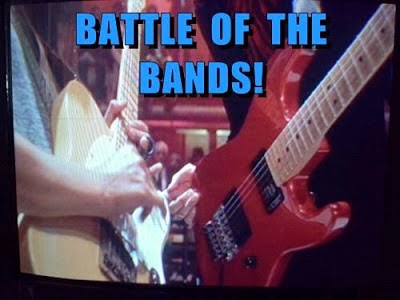 Time for the results in BATTLE OF THE BANDS XVI. This was an interesting match-up for me. I truthfully expected a runaway in the voting. If you remember, in my original post, I said that I was unprepared. You can feel free to interpret that as me pulling this song off my BOTB list at the very last moment, cause that’s exactly how it happened.

It wasn’t until today in preparation for THIS post that I did a little research on this tune. You all know it’s an original by Joni Mitchell, but did you know it’s consider one of her most ‘covered’ songs. According to Wikipedia there are 223 covers of ‘Big Yellow Taxi’. Wow! I had no idea. Aren’t ya glad I narrowed it down to two? The competition cover by Counting Crows is one of the newer, if not the newest, cover recorded.

I found some of your comments to be rather interesting if not downright hilarious. Arlee bird said, “It’s like she’s trying to imitate some Jamaican accent or something—it just sounds kind of weird to my ears.” Then Robin said, “Joni Mitchell sounds odd on this track. Clipped maybe. I’m not sure what is going on with her…” Both Arlee and Robin voted for Counting Crows.

Finally Stephen said, “It just sounded like Joni Mitchell to me. (And, by the way that’s one reason I was never a real fan of hers; she had such a distinctive voice and singing pattern or lyrical rhythm that most all of her songs always seemed to sound the same to me.” Stephen did vote for Joni because he didn’t feel that Counting Crows, scored a knock-out over Joni.

Well I didn’t really hear no Jamaican accent, but I agree that she does sound odd on this track. I’m not sure if her voice is clipped, but I do agree that basically it just sounds like good old Joni; distinctive – yeah, lyrical rhythm – maybe, but certainly her ‘signature sound’ that contributes to all of her songs sounding, at the very least, similar.

No matter what any of us think, I for one, have to give this woman credit for being incredibly prolific and an amazing poet. Can’t say I agree with all of her politics and I think some of her messages are quite ‘off the mark’ but none the less, she exhibits enormous talent is more than one art form. I do personally feel that most of her songs are better served by other artists. Therefore, is should not come as a surprise that my vote goes to Counting Crows. ‘Big Yellow Taxi’ may be Joni’s song, but I enjoy it more performed by others.

It seems most of your agreed with me. The final tally, including my vote, is:

On another note today is my very best friend’s birthday. I want to dedicate a song to them. It’s one you’ve heard before in a previous BOTB. Sit back and enjoy or pass on through to the comment box. This one’s for you Boo Boo, Happy Birthday! I love you.

Thank ya'all for participating. I’ll be back on April 1st with another BATTLE OF THE BANDS.